Meet the people behind Aster

Bjorn became Aster’s Group CEO in 2009 having previously been the chief executive of a smaller housing association. Since then, Aster’s housing business has doubled to more than 32,000 homes and has expanded its geographical footprint across southern England.

Bjorn has worked in the independent housing, care and support sectors for more than 30 years and has extensive board-level experience in both executive and non-executive roles. He has served as a non-executive director for an NHS Trust, educational organisations, regeneration boards and as a government appointee to a housing association.

Bjorn holds a master’s degree in management and is a fellow of the Chartered Institute of Housing and Chartered Management Institute. He is also a member of the Institute of Directors.

Andrew is a career finance professional specialising in the Treasury arena. He has held a number of senior roles, primarily in the debt finance function within British Gas, Vodafone and National Grid and is currently Head of Treasury at UK Power Networks. In his early career Andrew helped finance Eurotunnel before working on the demerger of Centrica from British Gas and the separation of the Gas Distribution Networks from Lattice Group.  Andrew has worked on several large acquisitions globally including Mannesmann at Vodafone and Keyspan Corp at National Grid.

Andrew has held a number of other non-executive posts including as a director of Aerion Fund Management and roles relating to his work as a trustee for various pension schemes.

Chris joined Aster in 2014, bringing with him extensive experience from the commercial sector.

Before Aster, Chris held senior finance positions at Euromoney Institutional Investor PLC and Regus PLC. At Euromoney he ensured the finance team were able to support the five-fold profit increase of the Group from both organic growth, and through acquisitions, including the acquisition of a fellow FTSE-250 listed Group. At Regus Chris was involved in the IPO and floatation of Regus’ shares on both the FTSE and NASDAQ indices.

Chris qualified as a chartered accountant at Coopers & Lybrand (now PwC) in 1994.

Mike has a doctorate in law which analysed residential tenants’ non-financial remedies for disrepair and unfitness.  He was housing ombudsman for England for 13 years until 2014. This role has given him an extensive understanding of all aspects of rented housing from complaint handling and dispute resolution to customer service and support, building good relations between providers and customers and valuing all forms of feedback to inform and improve systems, behaviours, and service delivery.

Mike has taught and researched Land Law, Landlord and Tenant Law and Housing Law extensively. He has also published articles in this field and has chaired and spoken at numerous national and international industry-related conferences.

Mike was a visiting professor in law at Southampton Business School where he has also held the post of Head of the School of Law. He has been a lawyer member of the Leasehold Valuation Tribunal, as it used to be called, and a member of the management committee of a registered social provider.

Since joining Aster in 2014, Mike has been the Senior Independent Director, Chair of the Group Audit Committee, and a member of the Customer and Communities Network.

Caroline has spent more than 20 years working in the fields of risk management, audit, internal controls compliance and ethics, finance and pensions.

The first 8 years of Caroline’s career were spent working in the engineering sector for WS Atkins, providing technical and quantitative risk management services to public and private sector clients, largely in the rail industry.  This included 4 years spent working in Hong Kong, China and Singapore.

Caroline joined Diageo’s internal audit function in 2003 and during 16 years with the business undertook a number of senior finance positions with Diageo, culminating in her final role, as Global Risk & Compliance Director leading an integrated global risk, control, compliance and ethics function.  Caroline is passionate about doing business the right way.

Caroline has a BA Hons degree in Risk Management from Glasgow Caledonian University, an MBA from Cass University.

Amanda has over 30 years’ experience in development, marketing and asset management for registered social landlords, joining Aster Group in 2012. She was previously director of business development at Synergy, prior to the merger with Aster and drove the strategic direction of the association’s new-build development activity, including becoming an independent preferred investment partner.

Before Aster, Amanda was head of development for Sanctuary Housing Group for London and the South East, and an associate director of Adams Integra, a consultancy specialising in housing development and planning. She was also director of development services for Apex Housing (now A2Dominion) for nine years where she was responsible for growing a mixed development programme from scratch to over 1,000 units per year.

Tracey is an accomplished Human Resources professional. She has worked as an Executive Board HR Director and has experience in many industry sectors including Retail, Manufacturing and Electronic Banking. She also has twenty years of Non-Executive Director experience with organisations such as Housing Associations, Foundation Trust Hospitals, and a variety of Charitable Arts and Sports organisations.

Tracey also works as a volunteer with Relate working in schools with children who are suffering emotional difficulties.

Chair of the Customer & Community Network

Michael is an accomplished CEO, Chairman and technology entrepreneur with over 30-years’ leadership experience in private, public and venture backed businesses specialising in technology for the built environment.

He has extensive overseas experience having led construction technology businesses in Sweden and Germany and established international distribution in Australia, Europe and the USA.  He has completed a number of international acquisitions.

Michael started his own consultancy practice in 2015 working as an independent director and consultant advising businesses and private equity firms on investment in technology.

He holds a Computer Science degree (Manchester) and an MBA (Warwick).

Clive recently retired from RBS/NatWest having been head of the bank’s housing finance team for many years.  He worked within the social housing finance market for over 20 years and was recognised as a leading figure in that sector.  Clive represented RBS within Government circles, including HCA, DGLG and CML Housing Committee.

In addition to his role with Aster, Clive also holds other non-executive positions and was also a consultant director with one of the sector’s leading treasury advisers for a short while.

Claire has been appointed to take forward Southampton’s Bid to be UK City of Culture 2025, working with Southampton’s communities, cultural organisations, businesses, and academic partners locally and in the wider Solent region. Previously, Claire was an Owner/Director of live music producers, Serious, which was known for its high-quality work and engagement with a diverse range of artists and communities across the UK and internationally. Claire is also an advisor on Equality, Diversity and Inclusion, working with organisations across a range of sectors.

Claire has over 25 years of experience in executive and non-executive positions, including being a Trustee of the Paul Hamlyn Foundation, a member of the Cultural Recovery Board, an Ambassador for the Mayor of London’s Cultural Leadership Board and a member of the Arts and Creative Industries Advisory Group for the British Council. Prior to Serious, Claire was a Director of Africa95, a cross art form celebration of the arts of Africa which took place across the UK and the African continent and which named President Nelson Mandela, President Leopoldo Senghor and Her Majesty the Queen as its patrons. After the first democratic elections in South Africa, Claire worked closely with the ANC on the country’s cultural strategy and helped establish Business Arts South Africa which had then Deputy President, Thabo Mbeki, as its inaugural Chair.

Claire’s expertise ranges from the creation and delivery of ambitious arts events and programmes, advising companies and organisations on equality, diversity and inclusion and the development of strategic partnerships with a broad range of stakeholders. She is actively involved in policy development across culture and civil society and an independent member of the Cultural Recovery Fund Board working with the Department for Digital, Culture, Media and Sport. 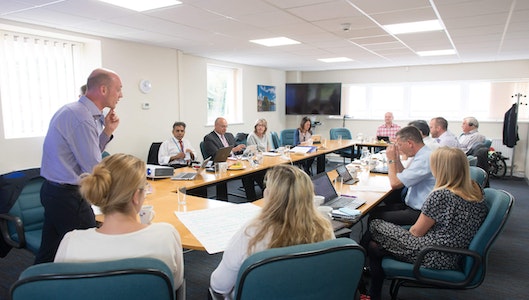 Find out more about our governance.

Find out more about our Executive Board.